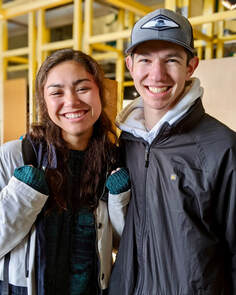 As a student-run natural history museum, it is, of course, integral to the proper functioning of your organization that the student leadership be top-notch. In 2018, the PWM couldn't have asked for two better student ambassadors and environmental educators than Kayla Pearson (c/o '19) and Sebastian Gonzalez (c/o '20).

Two thousand eighteen was a year of major transition for the PWM as a program and organization. Mr. Tacata had just been named the new Instructor of Classes and was, himself, learning everything on the fly. Tacata had a very specific vision for the new direction of the Museum -a transition to a more conservation-themed approach to the tour being a major one- and getting veteran students of the program to buy-in to this new culture was a challenge. Kayla and Sebastian met that challenge and went above and beyond. During a school year that brought constant changes in protocol and major changes in culture, it was these two young people who led the way: mastering and improving the Tour Script, learning how to teach different age-groups on the fly, stalwart students at every Museum event, peer leaders with a sense of patience and grace that most adults fail to attain. They were the first Lead Docents in a new era at the Museum and, in Mr. Tacata's opinion, the "best he ever had."

Kayla Pearson is currently a junior at UC Santa Cruz majoring in Environmental Studies with a concentration in Conservation Science and Policy. Currently, she is an intern for the UCSC Campus Natural Reserve where she works on various animal/plant restoration projects around campus as well as an intern at the Ken Norris Center working as a taxidermy technician, processing and preserving specimens for the UCSC museum collection. And if that wasn't enough for a full-time student, she also works for Santa Cruz State Parks specializing in visitor engagement. In addition to all this, Kayla is also an adept illustrator and has serious thoughts about pursuing a career as a scientific illustrator. If you're interested in her work, check out her portfolio here: kaylapear.com/. Kayla has an immensely bright future ahead of her and we at the PWM are excited about the tremendous amount of love, joy, and passion for wildlife and conservation she will bring to the world in years to come.

Sebastian Gonzalez, a young man particularly adept in the fields of design and construction, is currently in his sophomore year at San Diego State University majoring in Mechanical Engineering. His old instructor, Mr. Tacata, can attest: the young man can fix or build just about anything (as he did during his tenure at the PWM, including the design and construction of the entirety of his namesake, the PWM Gonzalez Tortoise Garden). Sebastian has a true heart for wildlife and conservation, however, his deepest passion is flight: Sebastian earned his CA Private Pilot License as a senior in high school and since, has regularly spent his weekends adding on to his flight time and growing battery of ratings and permits. Sebastian's ultimate goal is to combat the effects of climate change in a very direct way: as a pilot for a wildfire fighting agency such as Cal Fire. Sebastian has the skills, discipline, and passion to achieve whatever he puts his mind and heart into... He has a ton to give our community and, in time, we're certain his gifts will change a lot of lives for the better.

Kayla and Sebastian's contributions to the Museum cannot be overstated; they stepped-up and developed into leaders during a time when the strongest student leaders were needed to guide the program and, as young people of color, served as powerful youth role-models amidst our community's changing demographics. Trust-worthy, quick thinking, articulate, hard-working, motivated, and disciplined, at every level, Kayla and Sebastian exceeded our expectations for defined excellence in a docent from our program and that's the truth... Or as Sebastian would say, "We ain't lion." ;) 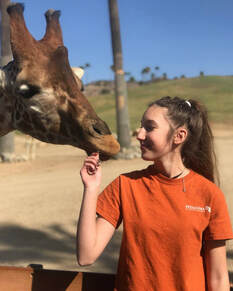 Few docents have shown a mastery of reptilian husbandry and dedication to our live animal collection as Devin Bach displayed during her tenure at the PWM. Devin cared for and loved our reptiles as if they were her own, and as far as Devin was concerned, as long as she was around, they WERE her animals! She knew everything about the creatures in our collection: basic biology and specific adaptations, range and conservation status, diet in the wild and recommended diet in captivity, humidity, heat, and UV requirements, lifespan, common and uncommon ailments, morph and subspecies, date of acquisition... You name it, Dev knew it, and in this role she served as an invaluable and reliable resource for our zoo during a time when the new Instructor was just learning the ropes and the new Animal Care Tech wasn't yet integrated into the school day schedule.

Speaking of schedules, in her Senior year at PHS, Devin was enrolled in one of the Museum Management sections, was TA of the other MM section, and would often spend her 3rd hour off-period in the museum finishing any trouble feedings or husbandry duties left undone by the previous class. In any given week for almost an entire academic school year, Devin would lead up to 8 elementary school tours, then spend another 20 extra hours outside of class to ensure proper feeding and husbandry was completed. Add that to the fact that she was also a straight-A student concurrently enrolled in 2 night classes at the JC, a stalwart bi-weekly volunteer at the Museum's Saturday Open House events, and also a volunteer at the Marine Mammal Center of Sausalito literally saving elephant seals every Tuesday night and you get a better picture of just how talented this young woman was... To paraphrase Maya, "Phenomenal woman, that's her."

Currently, Devin is a sophomore at UC Davis majoring in Wildlife, Fish, & Conservation Biology. She hopes to pursue a career in Marine Pathology or, if the opportunity is right, as a Field Biologist researching any number of the amazing fauna she has come to learn, love, and protect. While attending school via distance learning during her freshman year (due to the statewide Covid shutdown), Devin continued on as an adult volunteer at the Marine Mammal Center and has developed deep ties with the rescue and rehabilitation organization that will, undoubtedly, last throughout her lifetime. Our Museum, our PWM Family, and especially our precious Animal Ambassadors, owe a debt of gratitude for the love, dedication, and care gifted by one of the best to ever come through our program; thank you, Dev, for taking care of us all.

Anyone who watched her work can attest: Riley Hammack was a FORCE OF NATURE during her tenure at the PWM! Instructor of Classes Tacata remembers Riley's time at the Museum fondly as she was "an unbelievably polished and articulate presenter whose passion for the preservation of wildlife and wild places came over visitors like a wash of seafoam in the surf." Riley's ability to connect with children of all ages and communicate complex concepts of conservation to visitors was legendary... Week-in-and-week-out, children armed with all sorts of terrible animal phobias would walk into the museum and, by the end of the tour, Riley would have those same kids with boas around their necks, tarantulas in their palms, and geckos gripping their fingers... Riles brought the smiles! These children would leave the Museum with grins so radiant they could power their own mini food webs :) On tour, Riley was extremely adept at adjusting her vocabulary and tour examples to be age-and-developmentally appropriate for her guests; she was equally proficient at explaining the consequences of habitat loss to 7-year-olds as she was explaining the complexities of trophic cascades to adults.

While Riley's natural teaching abilities were remarkable for her age, even more remarkable was her dedication to the craft: after every tour, she would find a quiet place to reflect, taking mental note on what worked and what didn't, then practice making appropriate adjustments, and come back the next day and execute. Over the course of 2 years, Riley's presentations approached perfection, the only thing slowing her down being a darn global pandemic. Yes, she was a natural, but NO ONE during her tenure at the Museum outworked Riley Hammack and no one had a bigger heart.

Riles is currently a freshman at at Western Washington University majoring in Environmental Ecology with a focus on Education. She hopes, one day, to become a teacher, able to share her passion and knowledge of animals and conservation with folks for a living. In her spare time, she loves biking, hiking, and all-things-outdoors. She's also an active volunteer at various local river restoration organizations based in the Bellingham area and has recently picked up the sport of weightlifting, because the weight of the world on her generation's shoulders isn't enough. Maestra Hammack, keep learning, keep teaching, and never, ever stop loving... The PWM is proud of you <3